When I say kindness, I mean veganism

– The compassionate actor will give a talk and also film his documentary on veganism in Croatia On this year’s ZeGeVege Festival, which will take place on September 7 and 8 on Ban Jelacic Square in Zagreb, there will be a special guest – Dan Richardson, British actor and producer, vegan, wildlife conservation advocate and […] 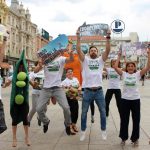 Everyone to 10th ZeGeVege festival

September 8th and 9th: more than a hundred domestic and foreign exhibitors, numerous restaurants, workshops and lectures, tastings… on the first day of ZegeVege minister Tolusic will show support by visiting Every ZeGeVege festival is the central annual event in the Republic of Croatia regarding the sustainable living, ethics of diet and enviromental concerns. 10th […]

We noticed on your website and Facebook and Instagram profiles you promote veganism through alternatives and substitutes for dairy, not to mention you are expanding the plant-based milk line and other vegan products. Does this mean that veganism is more popular in Croatia? The habits of dm customers and the popularity of dmBio organic food […]

bio&bio is a long-time partner of Animal Friends Croatia and ZeGeVege festival, and year after year more and more present at ZeGeVege with their offer and representation. What does ZeGeVege mean to you as a festival specifically known for the vegan offer? bio&bio stores build their foundation on education about the macrobiotic philosophy of living […]


Read The Rest →
1234567
ZeGeVege Festival of sustainable living is organized by the animal rights and protection organization for promotion of veganism Animal Friends Croatia.
Feel free to check our Privacy policy as well.